A new perspective on Martin Luther

In his day, German theologian and philosopher Martin Luther was considered a heretic and a blasphemer.  His ninety-five theses famously nailed to the door of the Wittenburg Church expressed his strong criticisms of the omnipotent Catholic Church, from which Luther eventually broke away.  Luther was further considered even more rebellious when he refused to retract his views, after which he was excommunicated from the Church.

More recently, however, the world has come to think of Luther quite differently.  Obviously, faithful Lutherans thank their founder for the work he did.  One prominent example of a practicing Lutheran was famous American Civil Rights leader, Martin Luther King Jr., whose parents revered the theologian so much that they named their son after him.

But it isn’t just members of that specific sect of Christianity who are grateful.  Indeed, members of the Church of Jesus Christ of Latter-day Saints also pay tribute to Luther and other participants in the Reformation.  Church leader Dieter Uchtdorf paid homage to Luther in his May General Conference 2008 address “Faith of Our Fathers,” in which he even revealed that he was a distant descendant of Luther.

One of Luther’s most famous doctrine was justification by faith alone.  This differed from the Catholic belief, which was that ordinances, or sacraments, were necessary for salvation.  Although Latter-day Saints revere Luther and view him as a crucial member of the Reformation, their doctrine of salvation is not exactly the same as his was; Mormons believe that faith is absolutely necessary for salvation, but they also believe in saving ordinances, such as baptism and temple rites, as a way to demonstrate that faith.  In this specific way, Mormonism is somewhat of a stepping-stone between Lutheranism and Catholicism. 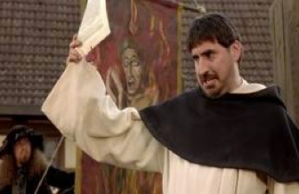 There have been two major films made about Martin Luther.  The first is the 1953 film Martin Luther, which stars Niall MacGinnis and was nominated for two Academy Awards.  The second version is the 2003 MGM film Luther  starring Joseph Fiennes (I highly recommend watching this!), which helps to emphasize the importance of Luther’s translation of the Bible from Latin to German.  Though the Pope and other Catholic leaders considered this controversial and dangerous at the time, eventually, this led to the influence of other translations of sacred text into languages that the common people could read.  This film also shows that Luther observed and hated how Johann Tetzel would sell indulgences, which meant that people could “buy” salvation for deceased loved ones.  Although the Catholic Church as a whole denounces Luther, as evident by his excommunication, many individual members throughout the years and especially today thank Luther for what he has done in helping to expose the problem of the sale of indulgences.   Also, the fact that these films was made at all, in the 20st  and 21st centuries as well, shows that even today, even in America, and even in Hollywood, Luther is still important, still remembered, and still somewhat relevant.

Though Catholic extremists of the day may have once hoped that Martin Luther and his rioutous views would fade away into oblivion, Luther’s influence has lasted long beyond his day.  Not only have Luther’s religious views affected us, his music has stayed with us, too.  Luther’s most famous piece to which he wrote the text, “A Mighty Fortress is Our God” is part of the Latter-day Saint hymnbook today.

Overall, Martin Luther has made quite a turn-around from how he was formerly viewed and understood. Once regarded as a blasphemer and a disturber of religious peace, Luther is now considered one who brought much needed attention to the corruption and problems in the Catholic Church,  founded a major Protestant denomination, and, as understood by Latter-day Saints, was a key participant in the eventual bringing about of the restored gospel of Jesus Christ.

[The] Reformation resulted in an increased emphasis on religious freedom,

which opened the way for the final Restoration.”

Wrote this essay in my college days…