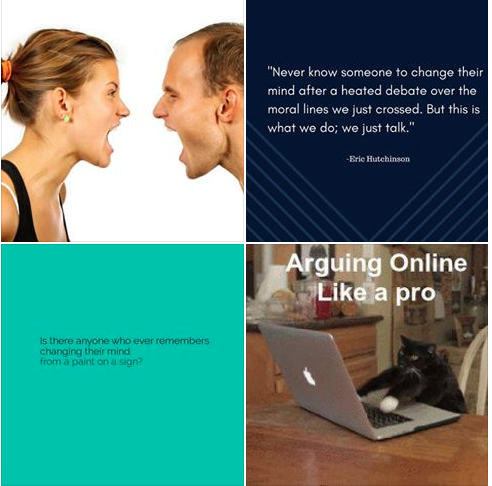 “In the midst of this war of words and tumult of opinions,
I often said to myself: What is to be done?”

I’m done with debating, fed up with fighting
Worn from this warring, so tired of trying
I’ll still take a stand; I’ll never back down
But a better approach is what I’ll do now

It’s not that I’m scared; I don’t run from a threat
But who changes sides from a Facebook thread?
I still like the skill of logical spars
But I’ve learned to step back; reexamine what my goals are

Controversy has its place, but to be most productive
I’ll channel my energies toward something effective:
Earn more, gift money, and give for a purpose
There’s so many needs that could use of my service

There’s a carnival of fools all waiting online
To steal your peace and waste your time
But don’t give in! Because feeding the trolls
Won’t help you meet your dreams, bring change, or reach goals

So go forth in the cause, and fight the good fight!
Don’t let a heated argument keep you up in the night
We could argue and bicker, we could talk ’til we’re dead
But let’s do something USEFUL instead!