To the Ordain Women Group- why are you doing this again? 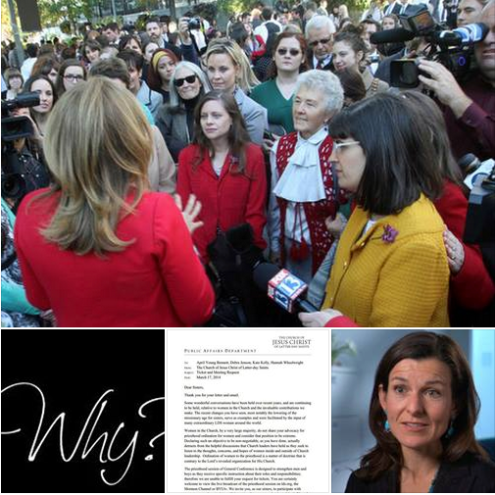 I think it’s high time for a little controversy, don’t you? 🙂
…
Those who are part of the Mormon “Ordain Women” movement make no secret that they will again demonstrate at the Priesthood session of General Conference taking place in 2 days time. Some are even more bolstered now than before (namely author Joanna Brooks), as they seem to take the letter from the PR department as some sort of a challenge.
…
Here’s where I am confused: Why would anyone put themselves through that….again? I understand that being denied permission to attend in October was quite emotionally taxing for those involved. So why would you want to do that to yourself one more time? Never mind that you are now deliberately defying the Church’s request; it just seems unfathomable to try again when you are destined to, well, fail in your endeavor. Before, you thought you had a chance. Now, you don’t have one at all.
…
I’m not trying to be unkind. I’m not even necessarily trying to discourage you. But why? Why are you going to torture yourself again? It seems to me to be emotionally masochistic. I know that you believe you have a greater cause, but at what cost (when it’s already guaranteed that you will not meet your goal) ?

Who finds a way to fit John Mayer into EVERYTHING?

Ordain Women, why are you doing this????