Warning: I am about to make a comparison between 2 things that are seemingly very different and potentially the slightest bit controversial. But just know that in John Donne’s famous poem, “Batter my Heart,” he compares spiritual conversion to sexual violence.  Mine is no where near that bad, and John Donne has been quoted in Mormon General Conference!  (So now that I’ve established my ethos a bit, onward I go!)  The following subject matter is not offensive, obscene, or inappropriate I believe, but it does concern an adult theme.  But it’s all good cuz I’m not worried about Miss Rosemary or Mr. William reading this just yet

SEX AND TEMPLES
Many people wonder why only certain people go inside Mormon temples.  There have been feelings of exclusion, privilege, secrecy, and us. vs them.  I was born and raised in the church and I struggled with it.  All through young women’s I heard, “you’re gonna get married in the temple.  you are the princess.  you will be so beautiful.  TEMPLE MARRIAGE RULES!”  I felt alone, and I thought I couldn’t ask questions or voice my feelings of nervousness, not wanting to do the whole temple experience, etc.  I didn’t buy the whole “sacred, not secret” thing.  I felt like it wasn’t fair that I would have to commit to something that I didn’t know beforehand.  I didn’t want to wear garments.  But I thought:  I CAN’T TALK ABOUT THIS BECAUSE EVERYONE LOVES THE TEMPLE AND THE TEMPLE IS SO AWESOME, ETC. AND WE DON’T TALK ABOUT THE TEMPLE SPECIFICS..so I lived in silent fear, shame.
As I got older I began to understand that it was okay to ask questions, be nervous, have doubts, and my anxiety began to lessen. 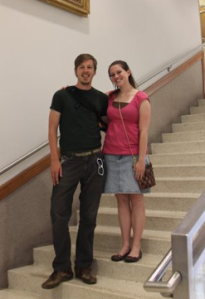 2 years ago a Christian friend visited me in Provo.  He asked me questions about the church.  I don’t know if he wanted to join, but he wasn’t antagonistic or trying to prove me wrong or anything.  We walked on temple grounds.  He loved it and took lots of pictures (he was a photographer).  He asked me why only Mormons could go in…..the sometimes dreaded question.  (though again he was earnestly asking; not offended or being antagonistic).  In that moment I had a thought come to my mind that was definitely not my own (at least not completely).  TEMPLES ARE LIKE SEX.  Let’s talk about sex first because that’s the one everyone is interested in.

In Christianity, God says sex is only between 2 people who are married.  It is natural.  It is good.  It is beautiful.  But when you take sex and put it all over the internet or the magazines or the songs, when you pervert and abuse it, it is wrong, it is offensive, sinful, shameful….ETC…when a couple is married, they have sex!  It is not a secret, not shameful or sinful.  And yet it’s not really appropriate to discuss the details with others.  Sex is for people who are commited, responsible, and mature enough to handle it.  To the wrong eyes and in the wrong contexts, it is wrong, but within marriage, it is right.

The temple is like this too!  It is for people who are committed, responsible, and mature enough to handle it.  To the wrong eyes and in the wrong contexts, it is wrong, but within the appropriate boundaries, it is right and awesome and wonderful.  Might be kinda weird the first time or two (like sex), but it grows more meaningful over time.  What goes on is not shameful, but we don’t talk about specifics because it is sacred.

By the way, it must be clarified that there is NOTHING SEXUAL ABOUT THE TEMPLE EXPERIENCE.#ain’t no kinky ceremonies  #just waiting for a thunderbolt for that blasphemy

Since my first time explaining this to my friend, I have used it in certain conversations with about 15 people-Mormon/not Mormon, endowed/not endowed.  And it has gone over REALLY WELL!  They get it.  And by the way, I feel good about knowing when is an appropriate time and place to share this.  Not something I’m gonna say over the pulpit, know what I mean?

1)  I invite all people to learn about the LDS temple, and if they choose, to prepare themselves to receive the blessings associated with it.

2)  Similarly, I strongly encourage all people to practice the principle of chastity in keeping with the laws of the Lord.

“What I am, and what I would are as secret as maidenhood.

To your ears, divinity.  To any others, profanation.”

PS.  Dear friends/readers, I kindly remind you that if you ever have questions about anything at all, you can always email me (katherineannewilkinson@gmail.com).  I wish to emphasis that I do not believe in bait-and-switching people into any religion or faith (if you think Mormons are cray-cray, it’s okay!), but if you have inquiries, I am a pretty good reliable source I think